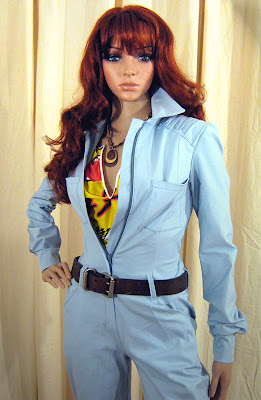 On Knight Rider, there was the "eye candy" auto mechanic chick who was always there in the back of the big tuck to do maintenance on KITT when Micheal came back from whatever heroic ordeal he had juct performed. The first was named "Bonnie," who was rather... handsome. I always preferred her replacement, April, played by the more estrogen-featured Rebecca Holden. 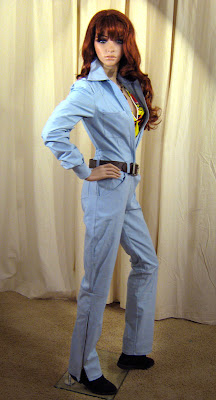 I'm not sure exactly what I was thinking when I decided to make a pair of coveralls as a fashion statement. I mean, they aren't really meant to look nice or fashionable, they are used to protect the clothing underneath. It is quite arguable, however, since there IS something incredibly sexy about what coveralls may or may not be hiding, and you are usually doing something dirty while wearing them. 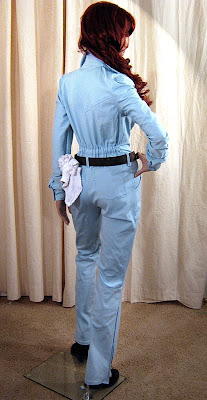 So I did envision this outfit as a "racer pit crew" chick who works on cars, zips off the top of the coveralls, and then goes and waves the checkered flag in all her greasy sexiness. This is, I suppose, an excercise in making something that looks more gritty and less meticulous than I am used to. It took just as long, however, to make something that looked thrown together, just like, and I have said this before, spending hours on your hair to make it look like you just rolled ot of bed. 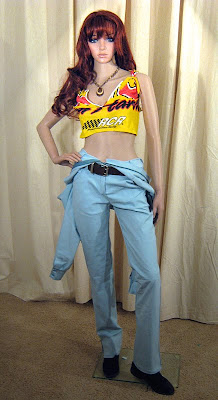 There are a few details on this outfit that serve a purpose. The fabric is heavy-ish, but has a good stretch on them so my girl can bend and squat to change tires with ease. The lower part of the pants have zippers on each side so she doesn't have to take her shoes off when she changes out of her outfit. each shoulder has a gathered shoulder "pad" covering to mimic the shoulder safety pads the drivers wear. The top and bottom front are all attached to one zipper, although I did my "boobie" treatment on top so that the front isn't meant to close at the bust. After all, in fashion, Sexiness>Functionality.

The thing that started this whole concept was the fabric that I used for the yellow tank top. Well over a year ago, the Shell station near my house was having a promotion for racing. They lined the lawn with flags of #29, Kevin Harvick, the driver of the car they were sponsoring, and when the promotion was over, I took one of the flags. I wish that I had remembered to take a picture of what it looked like before I cut it up! Nonetheless, it looked a lot like this. 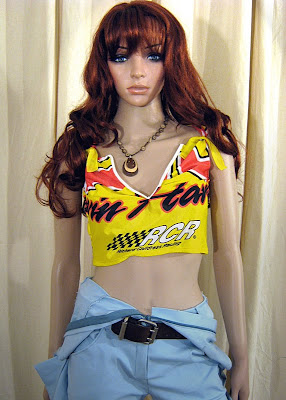 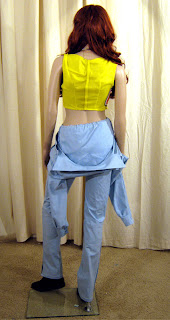 Personally, I like the way this looks with the top down!