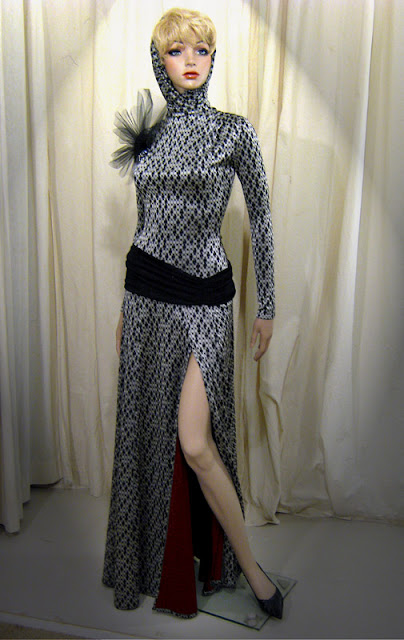 If you pronounced the above title, "Luh Pour-Pwah," extra points for you!

I have a lot of days off this week, so I decided to speed sew and make one garment each day. This is the second. It's actually less stressful, I have found, since I don't have something unfinished hanging over my head when I go to bed at night. Who would have thunk it! 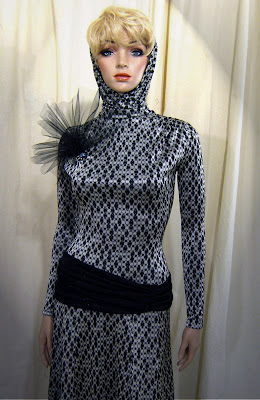 This little creation is a little unusual, I admit, but that is not necessarily a bad thing! Yes, it's meant to look like a combination of a Parisian evening gown, a dolphin, and a scuba diving outfit. I say Parisian because when I think of black/white/gray mixed with a bold red, I think Parisienne. The dolphin and scuba should be pretty apparent. 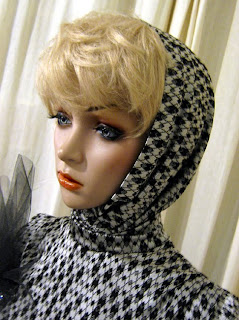 I really wanted to make a formal dress with a hood. It's not something that you see every day and not everyone can pull it off. You have to have a really strong face to basically have no hair. But for the woman that can do this, it can look amazing. 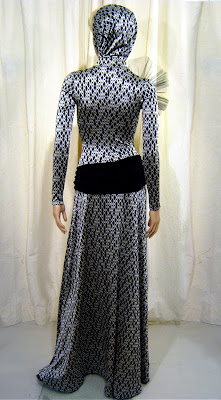 The bodice is pretty simple, made out of stretch fabric and fit snugly to the body. There are pleats at the shoulders. The little spray of tulle at the shoulder came later, when I realized that the black of the waistband needed to be balanced with something black higher up. If I had actually planned to put it there, I would have made the shoulder pleats gather up into the spray rather than equal at both shoulders. But even if I wanted to start over, I couldn't. I used up EVERY bot of material I had of this shiny grey mini-argyle. A skirt like this takes a lot of material! 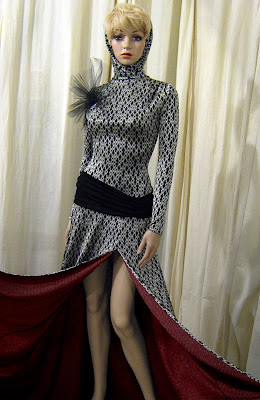 Speaking of the skirt, it obviously is the Pièce de résistance, no?  Even with the hood and super tight bodice that shows every curve of the woman's body, the red lining is what people would remember, I think.