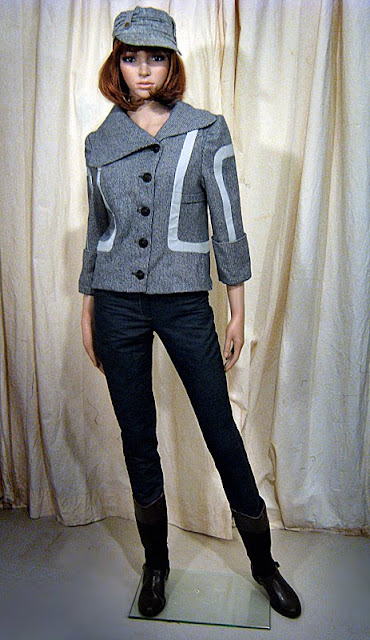 Finally, after three duds, I make something that I like! 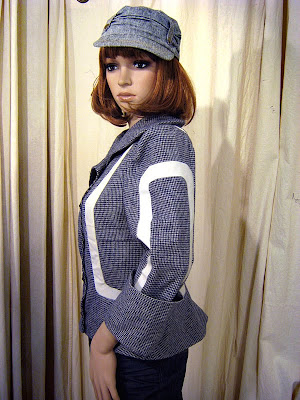 I you watched the video of the opening theme credits from the second season of, "Angie," (because if you're like me, you can't get enough of that song!) I was inspired by the "Apple Throwing" jacket and hat that Donna Pescow is wearing and also by the outline that appears around the opening title.

Yes, this is the same material that I used for the suit I didn't like a while back.  It is actually a woolen blue and white houndstooth, but appears grey when you actually stand back.  Well, this time, the color change wasn't a surprise, and I actually wanted it to look grey, so it worked out. 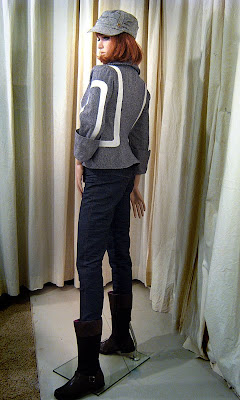 This is another one of those deceptively complicated pieces that you have to do a lot of work on to make it look this simple.  Those curved stripes?  Not easy...  I considered for a moment doing the stripes to edge the collar to really make the extreme asymmetry stand out as well as edging the cuffs to show how they are bigger than the arm.  In the end, I am glad I was not willing to put in the work, because it would have been stripe overkill and looked cheesy.  Yay for editing! 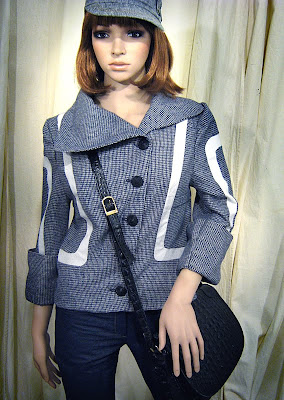 Oh, and Raine is looking very smug that she got to play Angie, although Leonora got her revenge already because I originally made a pair of shorts to go with this outfit, but didn't like them, so Raine had to borrow a pair of Nora's jeans.  And they didn't get washed first...