I am not doing this week's challenge from ProJRun because I have a rule of not designing fashion clothing  for children (costuming is different) until they get boobs.  If I HAD to for a TV challenge, I would probably make pants like these, because I think the little girl would love to spin and twirl and play with the skirt part without worrying about anyone being able to see her undies.  Wearing it, they would look like either a princess or a super hero.  Every girl would want one.

So, here to brighten your day is Marcia Brady. 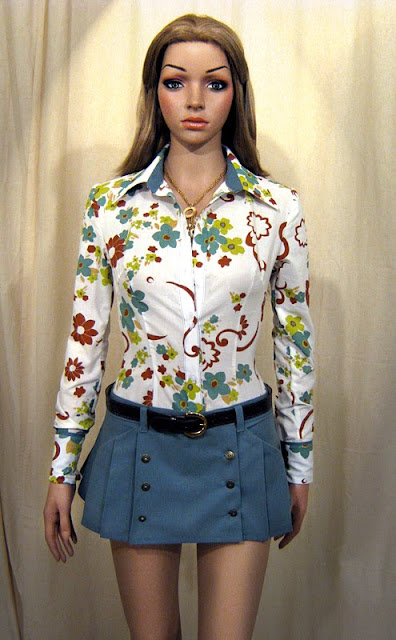 This outfit actually has a couple of hidden features.  Back in the 70's, these tight shirts were really in.  But did you ever wonder how it was that Marcia's top was always perfectly tucked in?  Because it was a body shirt, which meant it fastened under the crotch like a unitard.  Making this shirt in this method really made it easy keep the blouse from bunching.

But this outfit is really about the skirt in my opinion, since the blouse isn't at all complicated.  It's dangerously short and low-waisted.  What keeps it in place?  As Marcia would never wear something that ran the risk of being truly risque, this is actually a Skort.  So when she moves or sits, the skirt won't run the risk of showing anything.  It also won't ride up or rotate while she's walking.  So really it's a safety issue as well as a fashion one. 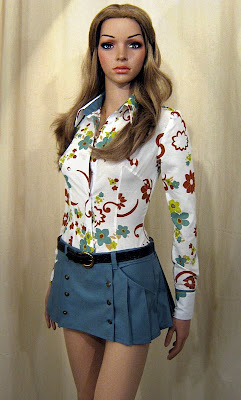 You might also notice that there are pockets and the pleats escape from under them, which is unusual to see in a pleated miniskirt.  In fact, I've never seen it before except when I did something similar for this hotpant kilt, so I'm totally taking ownership of this one until I see it all over the place in the near future, such as my short-sleeved jackets and one-side corner flappy flappys that other designers have totally stolen from me. 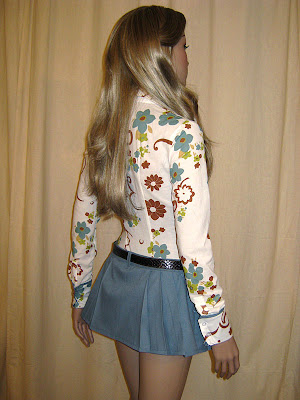 You know what the most challenging thing was with this photoshoot?  Marcia's hair.  Every time I reposed her, I had to brush her hair to make it look perfect.  I'm sure I went through the hundred-times technique that Marcia practiced on the show during the shoot!  It gave me a new respect for Christine Taylor, who played Marcia in the Brady Movies.  You can tell by the way that holds her head on screen that she was instructed to make sure her wig didn't become imperfect when she moved or walked!