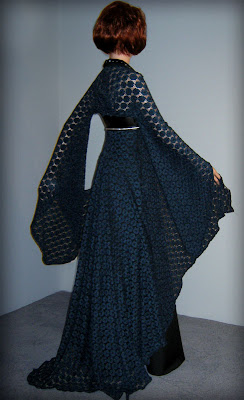 Endora was a manipulative shrew of a character who wanted to dominate her family's lives, so after some 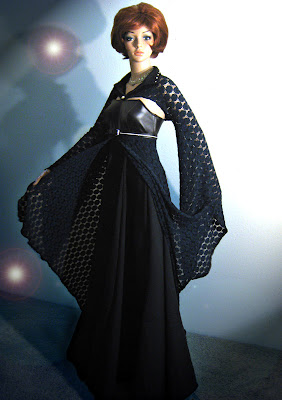 considerations on how to revise her trademark flight suit, I came up with a kind of scary combination of leather and lace. After all, she was a dominating mother-in-law from hell, but her character wasn't necessarily without a soft side.

So, that being said, I will acknowledge a few things:

I can think of many a drag queen that would adore to wear this dress as a costume for a Bette Milder rendition of, "I Put a Spell On You." It's not apparent in the pictures, but the skirts are VERY full. The black underskirt is more than a fill circle, so it would do well with grand gestures and swings and swooshes.


I feel awkward for saying anything negative about this dress that is kinda awesome. But, I think that if I sent something like this down the runway on a model, it would get me nearly booted off the show. The bottom is too heavy and you can kind of see how weight of it is pulling on the bustier. Working with a lighter fabric would have been much better with a style like this. Also, the rhinestones that I added to keep the whole thing from looking like one large mass of dark color unfortunately also emphasizes the "costumey" feel that was already present. It's good that I finished it, though, for there was a lot of learning experiences. 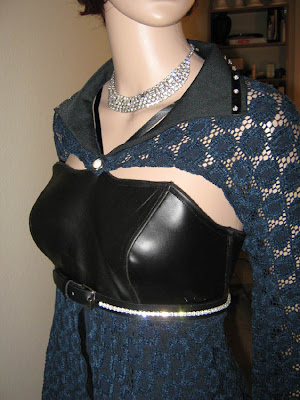 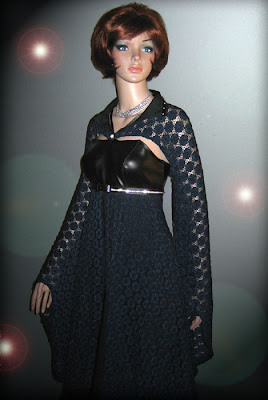 But you know what, I'll call it what it is and feel better. It's a fierce drag queen dress! Not that there are a lot of size 2 drag queens out there, but maybe if a few of them stop eating now, at least one can fit into this by October.


(Phail bonus! If you click on the small picture below, you can see the first attempt at the ultra-long sleeved bolero that I originally did in crisp white fabric with tan trim. I was going to make the dress in white, too until I saw this and was afraid that it would make Endora look too much like a dragon-lady. A grand one, if you get what I mean.) 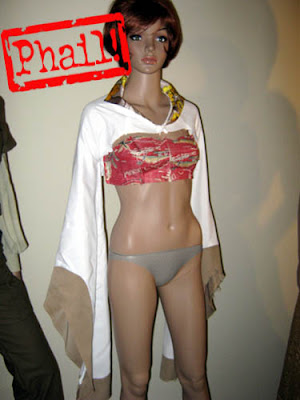 Fanart Entry! Sushi Ra is the Kitchen. But can she cook? Does she need to? 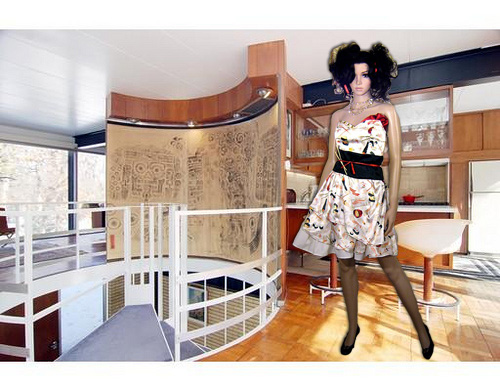 This picture was made by my father!  I think it looks like a piece of art that I would want to hang on the wall or a giant poster in a museum.
Check out the new feature I have added to the right of the page, "Fanart Corner".  I'll post the most recent picture and change it when I get new ones!
No comments: